Facility had been ranked having worst condition in region

The long-awaited modernization of Minnesota Valley Transit Authority’s Burnsville Bus Garage officially began May 4 with a groundbreaking ceremony at the facility located on Rupp Drive in Burnsville.

MVTA Chief Executive Officer Luther Wynder said upgrading the facility has been a priority for many years and noted that the building was constructed in 1977 as a manufacturing plant that was retrofitted for public transit.

The groundbreaking event was attended by local public officials, chamber representatives and U.S. Rep. Angie Craig, who express support for the project.

Craig said the modernization project was a culmination of an effort to make sure “our tax dollars are invested in Minnesota.”

The total project (Phase I – III) is expected to cost $13.2 million with the majority funded through federal grant dollars. Morcon Construction is the general contractor for Phase I of the project.

MVTA Board Chair Kevin Burkart noted that a 2018 Metropolitan Study revealed the garage had many structural deficiencies, including cracks in support walls. The 2018 study deemed the Burnsville Bus Garage to have the worst conditions of any garage in the region.

Burnsville Bus Garage currently is the base for about 65 buses that serve public transit routes based in Dakota and Scott counties. Once the modernization is complete, capacity will expand to accommodate about 100 buses.

The first phase of the modernization project that is underway will focus on bringing the facility to a “state-of-good repair.” Items that will be addressed include repairing walls, replacing windows and doors, and repairing concrete in the bus exit area.

Phase I improvements are anticipated to be completed early 2023.

Phase II improvements will include additional “state of good” repair improvements and a building addition for eight maintenance bays that will allow maintenance work to move out of the main bus garage and provide for a higher ceiling needed for bus maintenance.

Phase III improvements will include energy efficiency and sustainability improvements to lighting, roofing, HVAC, doors, and windows. Security upgrades will be added along with technology enhancements, including electrification initiatives that will lay the foundation for electric vehicles.

Burnsville Mayor Elizabeth Kautz said it was important to make sure the modernization project is done right not just for today, but well into the future.

“Public transit is vital to all of the employees in Burnsville and many cities MVTA serves,” Kautz said. 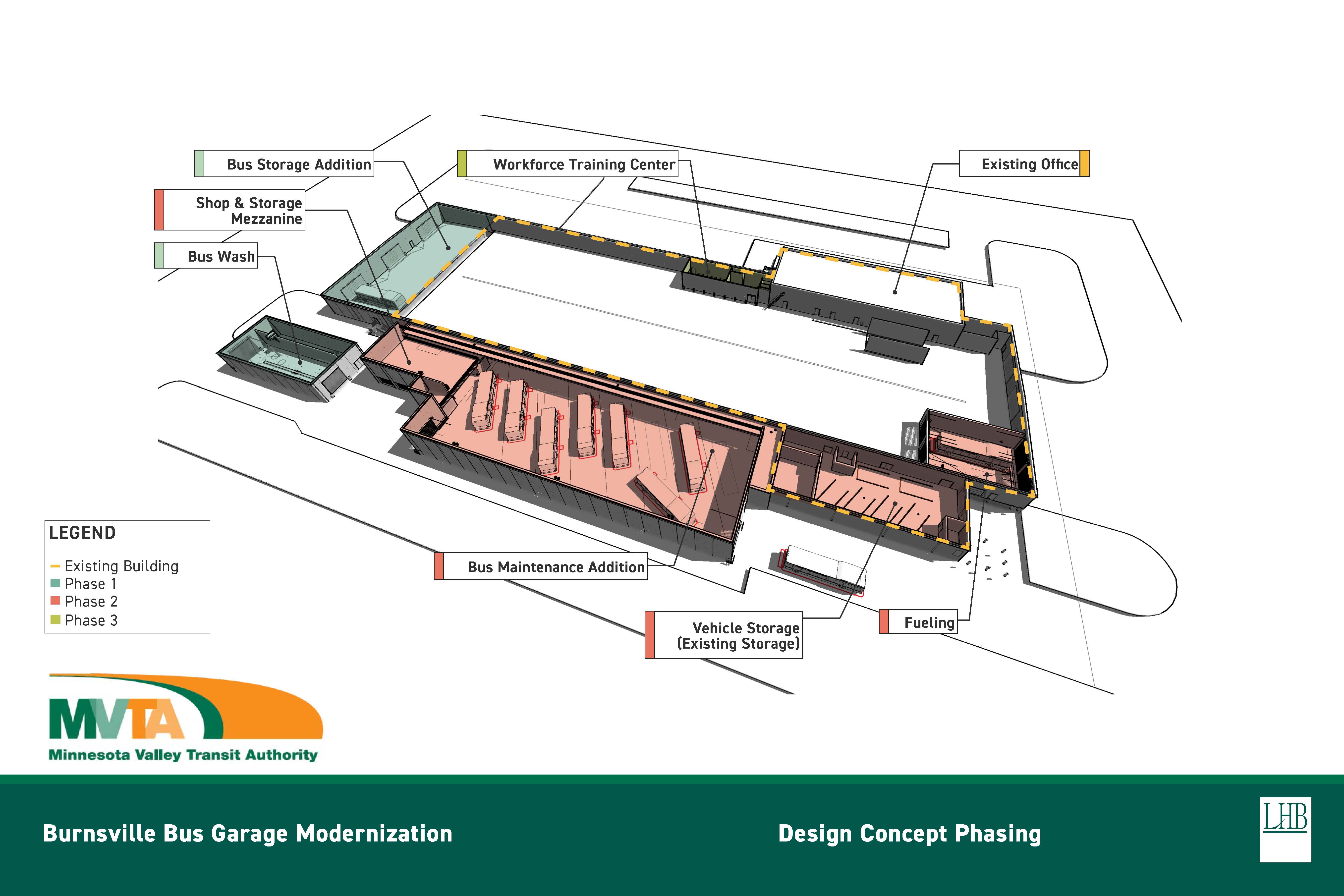 A concept design shows the planned modernization of the Burnsville Bus Garage, located at Rupp Drive in Burnsville.